One of the things I love about living in New York, is that take-out doesn’t have to be unhealthy, expensive and boring!

Today I ordered from Mint’s Thai Kitchen. A restaurant, that offers dine-in or take-out. I haven’t had the pleasure of trying their food yet, but I’ve seen the restaurant on Austin St., while walking by. 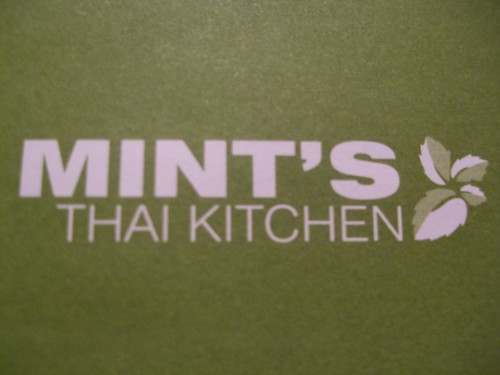 I ordered a two courses lunch prix fixe, of own choice of two courses. I went with the Larb Chicken Wrap and Panang Curry. I also ordered a Thai Iced Tea. 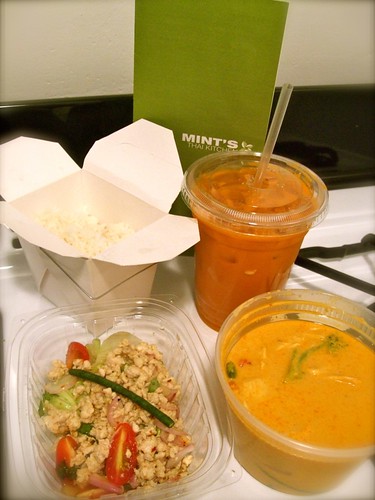 The Larb Chicken Wrap was, not so much a wrap as it was a large piece of lettuce with chicken and a few other ingredients. Though the taste of the chicken was good, it was too soppy and well, not a wrap. 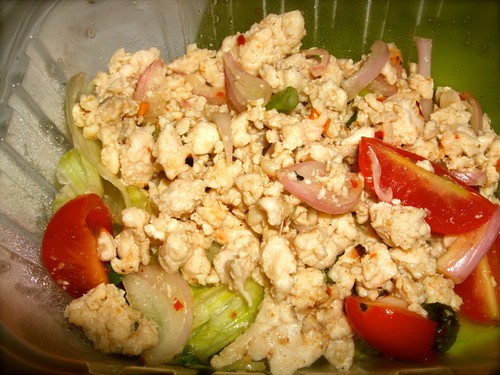 The Panang Curry, I had high expectations to. It’s one of the things I always order, when ordering Thai and I simply love it. I would say that the portion size was good (also considering the fact, that lunch specials often are smaller in size) the rice was freshly cooked and the panang chicken itself, was actually quite alright. It was a good experience! The taste was fresh, as well as the ingredients, plus it had the expected level of spiciness which sometimes can be difficult to get.

The Thai Iced Tea, came in a clear can with lid and a separate cup with ice, which I thought was a nice touch.
This is my first time ever having a Thai Iced Tea, so didn’t know what to expect. But, I do like it.
It’s not too sweet nor bitter. The bright orange color is interesting! And everybody that knows me, know I love my colors, so for that it gets 1 point (not that I’m keeping score)
– But I have to add, that I’m happy I got a diet coke with my order. If you’re thirsty, this Iced Tea is not the right choice. (I’m still working on it an hour later…)

Over all: The prix fixe was $8, and with the choice of different starters/appetizers I would most likely order it again. Not the Larb Chicken Wrap (or whatever it was) but maybe a soup .. And definitely the Panang Curry chicken!
As for the Thai Iced Tea: I’ll get back to you on that one.

AND that was my first food blog, ladies and gentlemen! ’cause why not …